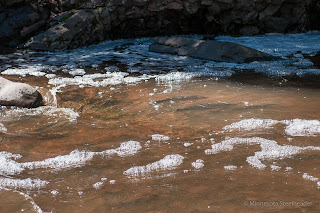 Each fall, many of us make the pilgrimage back to the North Shore to wet a line after long a summer away.  Memories from past spring seasons often fill our thoughts while enjoying the beautiful drive, anticipating what the fall season will bring.

Fall fishing on the North Shore typically consists of chasing pink salmon in low, clear water although there are days where steelhead and coho seem to magically appear. These lower water levels make getting around rivers much easier and are an ideal time to learn more about what makes your favorite high water holes so productive.

Fall fishing also comes after the busy summer tourist season; and with the summer season come lots of folks who enjoy playing in the water. Who can blame them? The cool water is quite refreshing on a hot summer day, and a relaxing hike exploring North Shore streams is food for the soul.

It's unlikely there is a dramatic impact on the fishery or habitat with a swim here or a water-hike there, but another sumertime construction activity can be more problematic: Dams. We're not talking about some large-scale hydro-project, but those dams people enjoy building for fun. Our guess is most of you seasoned anglers have seen one or two of these makeshift dams in the past, you may have even helped the kids build a few if you have them (kids that is).

These fun little vacation projects seem harmless enough, and there are likely a few water creatures which benefit in the short-term from the newly-created pools. In the long term, mother nature takes care of these dams - they rarely see more than a season.  Each spring when the churning rush of water and the crashing of ice and debris scour the streams, no man-made rock dam is likely to survive intact. 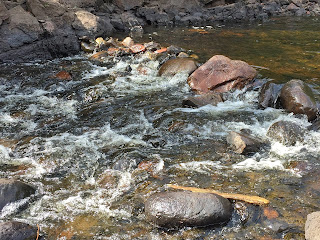 The larger problems arise during low fall water migrations years. This photo was taken last week, about a dozen small rocks were removed from the area between the brown bolder (far right) and the red bolder (right of center) prior to the picture. Note the small chute of water flow created from the removal of those rocks. This area previously looked like what you see on the far left.

If the salmon were to make it upstream you might say, "no worries, they will die anyway,"  but what about the Brook Trout? Trout like coasters and steelhead typically back out of a river after spawning. Backing over obstructed passages is much more difficult for fish than upstream migrations.  Then there are the young steelhead who have spent a upwards of three years growing up in the river. Those young rainbows may soon find the journey to the big lake a struggle with an obstructed if not completely blocked path. 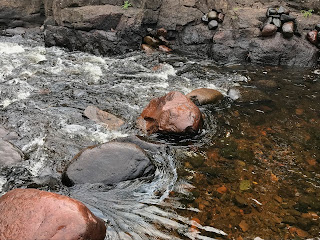 As you head to the North Shore this fall, be observant during your fishing quests for these makeshift obstructions. If you see impassable rock dams assembled by visitors to the shore, consider moving a few of the rocks to create some navigable lanes for upbound and/or downbound fish. We are not asking for nor wanting you to demolish or reconstruct waterways, just give those fish a bit of an edge and open the door for them.  Mother nature will take care of the rest in due time.

Tight lines to all.