Showing posts from April, 2010
Show all 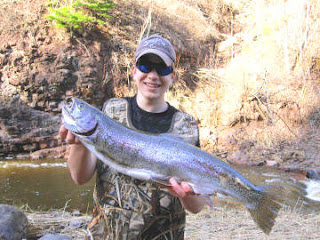 It has still not rained more than 1/10th of an inch anywhere on the shore since the snow melted in mid-March. All streams are low and clear. The run is peaking in the section of the shore from the Baptism to the Brule. Successful anglers fished early and late, used flies, spotted fish, snuck up on them, and made accurate casts. 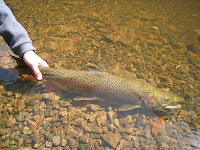 From 4/19 through 4/22, interviewed anglers caught 11 Steelhead and 8 Kamloops on the Lower Shore, 4 Steelhead, 1 Kamloops, and 1 Brook Trout on the Middle Shore, and 2 Steelhead on the Upper Shore. The three creel clerks reported observing steelhead in every stream on the creel. Successful anglers fished early and late, used flies, spotted fish, snuck up on them, and made a good cast. 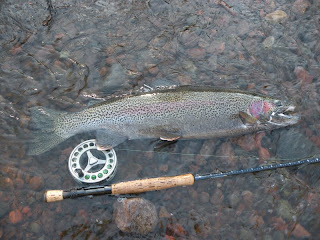 Here's an interesting bit of information on steelhead movement from an MS.com contributor.

Jesse made the trip up & fished April 16th-18th. After working the Lower Shore, he continued North looking for fresher fish. Around 5 p.m. on the 16th, he landed this super buck on a Mid Shore tributary. Note the "Rod Rule" on Jesse's Flyrod, great tool for keeping the fish in the water yet still getting a quick but accurate measurement:
After landing the fish & examining it for clips etc., he noticed that this fish had a Floy Tag; so he duly recorded the information & forwarded it to the DNR. You can use the new Tagged Fish Reporting Tool Here:
On the 20th the DNR contacted him regarding his fish & here's what Jesse said: "I heard back from the DNR today on my tagged fish. It was originally tagged in 2008 at the Knife. It was recaptured this year at the Knife on April 1st. They passed it along up stream. Between the 1st and the 16th it left the Knife, sw…
1 comment
Read more 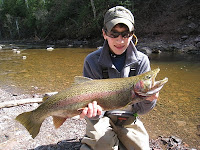 Spring of 2009 we corresponded with Dan, a MinnesotaSteelheader.com visitor. He was planing a first steelhead adventure with his son, Davis (13 years old). Though they were new to steelheading, Davis had been doing his homework and spent the winter tying up fly patterns. After several emails with Dan regarding technique, gear, destination possibilities, etc. they were ready for there adventure.
On a nice bluebird morning in April of '09 Myself and a couple other MN Steelheader staffers ran into Dan and Davis at a river parking area near two Harbors. It was great to bump into these two after corresponding much of the winter via email.
We visited for a while, sharing what we new from the river we were fishing and about the conditions. After looking over Davis' wonderfully tied flies and their gear we were confident that they were set up well. It was now up to their skills and some luck to get a hook up or two.
I received an email a week or two after their adventure with news that …
Post a Comment
Read more 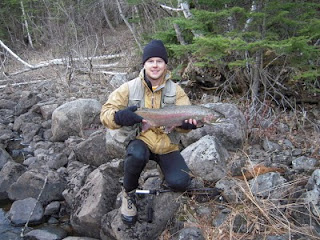 Pictured here are MN steelheaders, Adam and Jay with a couple of nice Upper shore Steelies. These were caught over this past weekend. Despite the low water there are still big fish up and down the shore. 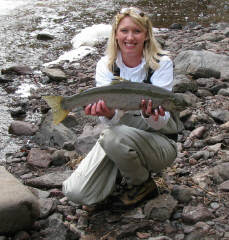 Despite the low water and bluebird days our followers are still catching fish. We have weekend reports for fish caught from the Knife all the way up to the Brule. Most of the reports are coming back with larger than normal fish too. Below is teh MN DNR weekend report.

From 4/16 through 4/18, interviewed anglers caught 31 Steelhead, 12 Kamloops and 9 Coho Salmon on the Lower Shore, 33 Steelhead, 5 Kamloops, and 5 Brook Trout on the Middle Shore, and 8 Steelhead, 1 Kamloops and 2 Brook Trout on the Upper Shore. Most fish were caught in the section of the shore from the Sucker to the Baptism. Large streams are low and clear, and smaller streams are blocked off already by gravel bars. One ca…
Post a Comment
Read more 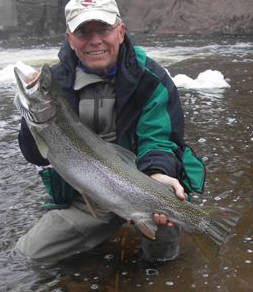 This Monster Steelhead was caught Thursday 4/15/10. This beauty, submitted by a MS.com follower, came in at 33" long - a true North shore trophy.

From 4/12 through 4/15, interviewed anglers caught 2 Steelhead on the Lower Shore, 19 Steelhead, 2 Kamloops, and 2 Brook Trout on the Middle Shore, and 6 Steelhead and 7 Brook Trout on the Upper Shore. Most fish were caught in the section of the shore from the Stewart to the Baptism. No significant amount of rain fell anywhere on the shore this past week, and water levels and clarity are low and clear everywhere. Smaller tributaries are blocked off already by gravel bars.

As of 04.13.2010, the lower, mid & upper shore stream temps all are in the run/spawning range for steelhead. One slight issue: The Baptism sonde package looks like it needs to be re-calibrated. The readings appear to be about 7°F on the low side, so keep that in mind. Lower, Mid & Upper Shore index stations respectively as follows (Click Images for Larger Versions):


With the low, clear water, look for fish to be holding in the deepest holes & pockets adjacent to spawning gravel along with slots, eddies & seams in broken shallower water. Work slow, methodically & as stealthy as you can through these types of sections. Hopefully we'll get some rain soon!
Regards-
NMF
Post a Comment
Read more

I get so wrapped up in the data sometimes I forget that perhaps I should explain where I'm getting information from. No wonder people often look at me like I have lobsters crawling out of my ears...


The line represents flow in cubic feet per second. 1cfs = about 7.5 gallons per second. Flow goes up, line goes up etc. If you want to see the temps however, just click on the, "data for above period (csv)" link at the bottom of the page there. This will open a csv file (comma separated value - o.k., THAT's overload!) in a spreadsheet format & the temps will b…
Post a Comment
Read more

A few of the Minnesota Steelheader staff headed for a North Shore excursion this past weekend. I say excursion because with the lack of water in all the tributaries from Duluth to Canada we just didn't know if this was going to be a fishing trip or a sight seeing adventure.

We packed up our gear and headed north Thursday evening. After much discussion we decided to call Two Harbors our home for the night. The last minute planing with are buddy Greg helped as we decided to all meet up Friday morning for some Middle shore river fishing. Nothing to early as the spring like air expected to get down to 10°f. With the cold evening temps we expected the water to be a bit too chilly at first light - water was 34°f at 7:30am on the Stewart.

Arriving to our main destination by 9:30am we were ready to get our feet wet. With water temps now at 38°f and a blue bird day we new it was just a mater of time before we got the magic of the 40°s. Though the water was low we did manage to land …
Post a Comment
Read more 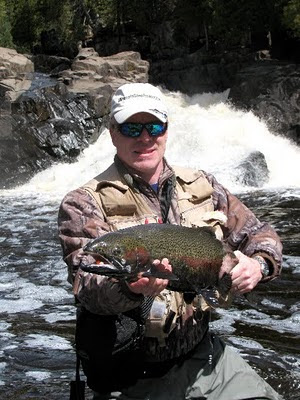 From 4/9 through 4/11, interviewed anglers caught 29 Steelhead, 34 Kamloops, and 12 Coho on the Lower Shore, 13 Steelhead on the Middle Shore, and 13 Steelhead, 1 Kamloops, and 5 Brook Trout on the Upper Shore. Most fish were caught in the section of the shore from the Lester to the Stewart. Water levels and clarity are fairly low and clear on the entire shore. Forecasts indicate nights will stay above freezing this week, and rain is forecast from Monday through Wednesday. If we get an inch or more of rain shorewide and stream temperatures stay above 40, we should see runs of fish shorewide.

Most fish were caught in the section of the shore from the Stewart to the Split Rock. Water levels and clarity are fairly low and clear on the entire shore. Nights below freezing this week, have brought stream temperatures down each morning. We need rain shorewide, and nights above 40 degrees to bring staging fish in.
Totals for the Knife Trap are thus far are 273 unclipped steelhead, 216 maxillary clipped steelhead, and 16 Kamloops. Totals for the French River are 68 unclipped steelhead, 3 maxillary…
Post a Comment
Read more

The Poplar River Sonde is a great resource for figuring out what's happening on the Upper North Shore. You can use it like an index station as it tends to track fairly closely with regards to temperature on streams like the Arrowhead Brule, Kadunce, Devil Track & Cascade Rivers.

The Upper North Shore looks to be having just as early a run as the rest of the North Shore rather than the 1-3 week lag of the Lower North Shore. Here are the latest low, average & high temperatures as of 04.09.2010 (Click Image for Larger Version):

I was able to get in a quick trip to the lower shore on Saturday April 3rd. The rains from Friday had brought water levels up to the mid-260cfs range, but unfortunately temps dropped 4-6 degrees and clarity went way down. This made fishing very difficult.

Not many fish hooked or landed by anyone. The worst part was the wind... Attempts at high-sticking just resulted in the wind taking the line and pulling the business end up and away from where the fish were holding.

mid-afternoon was best after the sun came out. I missed 5 or 6 fish, hooked 2 (including a very large male steelhead) and landed 1 smaller kamloops hen.

Surprizingly, small yarn did the trick. I fished big and bright until about 1:30 or so; but made the switch and immediately started getting results which was shocking considering the conditions. 1/2 ply of 1/4" long orange over blue yarn got the most attention from the fish. I also saw a couple more very large steelhead hooked/landed by the only ot…
Post a Comment
Read more 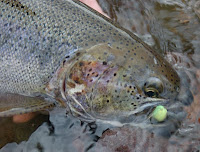 From 4/2 through 4/4, interviewed anglers caught 44 Steelhead, 10 Kamloops, and 3 Coho on the Lower Shore, 50 Steelhead, 3 Kamloops, and 1 Brook Trout on the Middle Shore, and 1 Steelhead and 4 Brook Trout on the Upper Shore. Most fish were caught in the section of the shore from the Sucker to the Split Rock. After isolated showers Friday night, water levels rose and became slightly turbid from Duluth to the Split Rock and rain did not materialize from the Split Rock to Canada. Water levels and clarity is fairly low and clear on the Upper Shore. Hopefully we get at least ½ inch of rain on Tuesday night and Thursday as predi…
1 comment
Read more

The rivers on the Minnesota Shore of Lake Superior are now open from Duluth to Canada.