Showing posts from August, 2010
Show all

My buddy Dan who is an Alaska State Wildlife Trooper is the one that showed me this pattern, but only after I threatened to push him in the river. He was demolishing pink salmon at the Baptism on this fly one afternoon while I, inept and ham-fisted as I am, was resigned to playing tiddly-winks for lack of better things to do. (I certainly wasn't catching fish...) Since then I've caught quite a bit of everything on this pattern from inland trout, to steelhead & salmon. The only adjustment needed is to size the hook/fly appropriately to species. This is a killer skinny-water fly on steelhead and where legal, makes an absolutely deadly dropper. Pattern illustrated tied on a #10 TMC 2457 with 0.025 lead wire under the thorax & no bead. Hook: TMC 2457 Thread: Black 70-140 Denier based on fly sizing Bead: Gold or Copper optional Weight: 6-8 turns of 0.010-0.030 wire (optional & to size) Tail: 8-10 Rooster Pheasant barbs from the bottom 1/2 of the tail Abdomen: 2-4 lon
Post a Comment
Read more 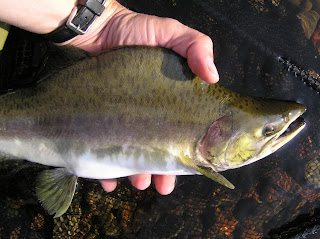 If you haven't been paying attention, or maybe your brain is about melted from all this heat & humidity like mine is, but fall fishing is just around the corner. Browns have been coming in on select tribs & pinks have been staging in numbers off of North Shore tributaries. What's interesting is that in a typical year, the first reports of pinks show up in the DNR summer lake creel just about a month to the day before they show up in the streams. Usually this takes place in the Grand Marais/Hovland area & around the middle of August. This year, reports of near-shore pinks started showing up around the 20th of July which is really early. That & very good numbers are being caught as far south as Two Harbors. You'll probably get tired of hearing me say it, but fall pink fishing is a great way to get out and learn streams for spring steelheading. The fish utilize similar areas, & you're better able to spot things about individual streams you wouldn'
4 comments
Read more
More posts