Showing posts from October, 2006
Show all 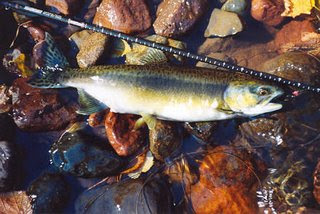 There have been a lot of rumors swimming around over the years as to how the Pink Salmon became full time residents of Lake Superior. We figured it is time to tell the real story. It dates back to 1956 when approximately 21,000 fingerling pink salmon, on their way to a tributary to Hudson Bay, were unintentionally released into the Current River in Thunder Bay, Canada. These pinks were grossly underestimated. Critics saw these pinkies, aka humpbacks, as the least likely of all the exotic salmon to survive in the fresh water of Gitchigumi. But to much dismay, in 1959, two spawning pink salmon were caught in two separate tributaries, one in the Cross River and one in the Sucker River. Since those first days back in ’59 our Pinks have been running the streams and rivers of the North Shore on a two year cycle. Yup, two years, that is it. During the 60’s and 70’s the Pink population exploded in record numbers. The dramatic increase in numbers was considered an annoyance by some and heave
Post a Comment
Read more 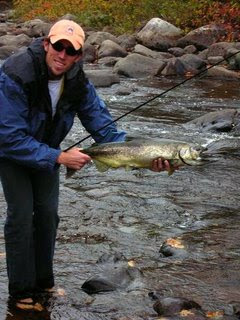 Quick update, I stopped at nearly every river from the Lester up to the Indian Reservation last weekend. It was mostly a leaf watching and hiking weekend but of course I brought a couple rods along. The pinks were in every river with enough water. A lot of them are in rough shape but you still can find fresh fish if you look around. A stop at the French revealed a pool full of chinook, so I took my time at a nearby river and finally spotted a mongo buck holding in fast water near cover. He absolutely smashed a purple esl. It was my biggest king in my two years of fishing the north shore. I continued up the shore and found many pinks but the kings were indeed rare. The remaining kings I spotted on Saturday were much smaller and hanging out in slow pools. I never have much luck without current. On Sunday a fish bigger than the surrounding pinks materialized at the head of a strech of deeper gravel on a mid shore river. A dozen casts later I was tied into a fresh, fat little hen chinoo
1 comment
Read more 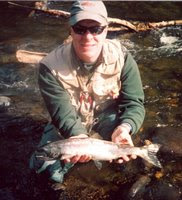 Even in low water you can catch a salmon or two, if you know where to look. The key is to find a river with enough water to bring in the fish. Next, find the deep pools and holes. Realize you may have to offer up some info to the occasional tourist. If you are not seeing tourists you may be searching for your quarry in the wrong location. Once you find a river with decent water flow, focus on the pools. Salmon will congregate in these deep pools for protection and comfort. Due to the low water, many of the pools call for a slow presentation. This is not like high water yarn fly drifting. Sinkers are usually not needed. In fact, sinkers can actually do more damage than good. With the slow water come slow, natural presentations. Stick to a natural dead drift, swinging, or stripping, depending on your selection of fly. Our Method this past weekend was a combination of a dead drift and slow strip of a Hercules fly – a bead head wooly bugger modification. When it comes to fall North Shor
Post a Comment
Read more

With the close of the 2006 Minnesota inland trout season came beautiful fall colors and peaceful weather along the North Shore. Though most of the North Shore Streams were mere trickles slowly gurgling down to the big lake, a few of them carried enough water to welcome the early bird fall spawners. The rivers we fished were only a few. Some secluded inland streams and some of the mid-shore Lake Superior tributaries. The Rivers along the North Shore this time of year are prime time for Pink Salmon, Coho and even coaster brook trout. Read your regulations first! The brook trout season below the posted boundaries closed Sept. 5th. If you catch one, get her back in the water ASAP! Back to the Pinkies… they are in. We fished a few of the rivers between Silver Bay and Cascade Park. Pinks were in all rivers fished and in good numbers considering the low, low water. We found the deep holes to be the most productive areas. Good old Hercules (see our fly box) found his way down in these holes
Post a Comment
Read more
More posts