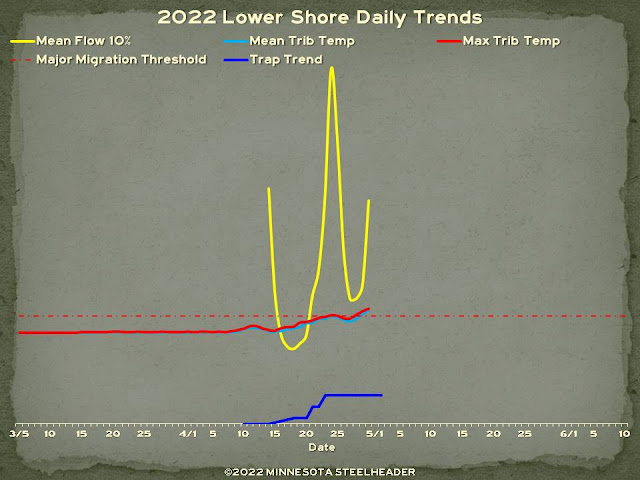 Latest North Shore Conditions: SHORE-WIDE BLOWOUT Cripes! There's no way to sugar-coat that and we were just flirting with our first major push of the 2022 season, at least on the Lower Shore. No question there are fish around and have been for a while. They are being caught in the rivers and at the trap, but May 1 flows across the shore are in ludicrous territory. 1800cfs at the Knife, 1580 and climbing at the Baptism, 1400+ at the Arrowhead Brule as of this writing. It's enough to make a steelheader cry but DON'T, one thing we don't need is more water right now! Which is crazy to think given last year's widespread drought, we would have paid cash money for this kind of precipitation. Lower Shore conditions since MNST started tracking on March 5th. Flow values ice-affected or backwater/backflows prior to April 13th and not posted. The charting ends on April 30th immediately before things got crazy but as we said, we were flirting with it: Mid Shore was trying to w
Post a Comment
Location: Duluth, MN, USA
Read more 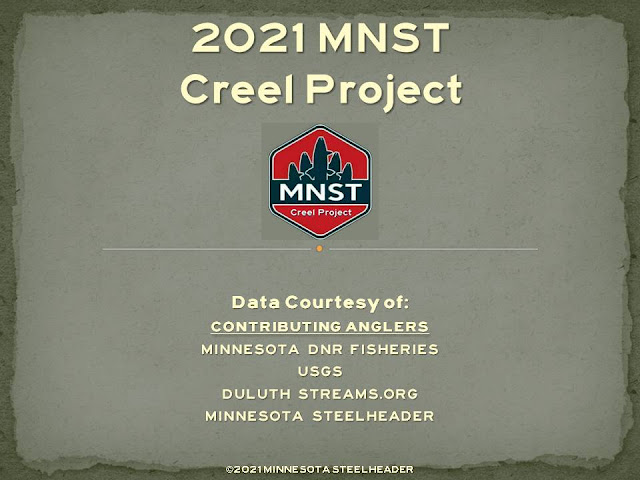 The 2021 report nearly didn't happen. MNST would like to thank those anglers who took the time to submit because those reports provided just enough data to work with. Just one or two fewer submissions to the creel project and MNST would not have had enough data to publish anything meaningful. It was that close, so thank you Reporting Anglers!     Each year, Minnesota Steelheader collects angler-submitted reports of fish caught through our Creel Project page. We’ve transitioned away from kamloop reporting with the cessation of stocking, and are now reporting clipped and un-clipped rainbows as well as presumed coaster brook trout. Catch information is presented in ways we hope provides you with the most accurate picture of Minnesota's annual and long-term North Shore steelhead run behavior. This is not a true scientific creel by definition. We do however incorporate and present as much of the available scientific literature as we can; the difference is that this is do
Post a Comment
Location: Two Harbors, MN 55616, USA
Read more
More posts