Showing posts from April, 2012
Show all

Sucker River Clean Up - Postponed due to cleanliness

Hard to believe we would ever have to postpone a River clean up due to cleanliness... but it is true! After a survey of the lower stretches along the banks of the Sucker River last weekend, our crew of 3 staff members discovered, a lack of trash.  In fact, a walk down to the lake produced only one single pop can and a small plastic bag. That is it!  After reviewing the 2012 clean up campaign we felt it would be better if our group efforts were utilized more thoroughly.  The idea of  a dozen people making the drive, several from the cities, with not much to collect, just didn't seem like a good use of voluneet time.  So, we have decided to postponed the clean up date until the fall salmon run, tying it in with our annual streamside salmon & trout fishing clinic. Letting the spring and summer tourist season pass will maximize a larger collection of trash and just in time to beat the winter snow pack. Having said all that, there will still be a few of us activly picking up
Post a Comment
Read more 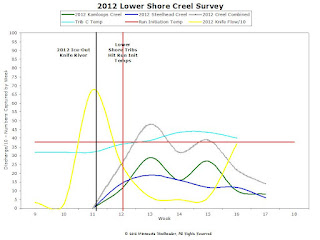 And some creel analysis... Still good steelheading to be had! Regards- NMF
Post a Comment
Read more 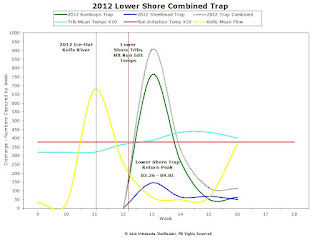 Had a chance to do some initial analysis of the Lower Shore Combined Trap Numbers (Knife and French) and the result is shown above. Keep in mind the temperatures are adjusted by a factor of Ten so the relationships can be seen better against the high flow and fish numbers. There are still fish to be had on the Lower Shore, so get out after 'em! Regards- NMF
Post a Comment
Read more 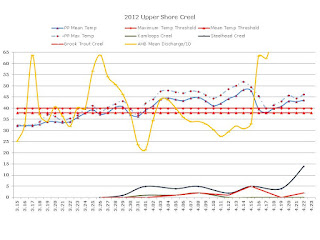 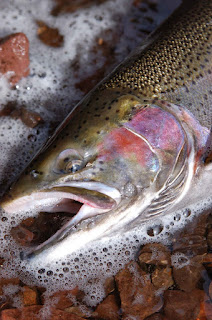 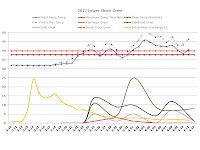 By Minnesota Steelheader - April 09, 2012
In an unprecedented move because of low water levels, Minnesota Department of Natural Resources fisheries officials on Friday began transporting steelhead from the Knife River fish trap upstream past the Second Falls on the Knife River to assist the fish on their spawning migrations. The fish are being transported about 5½ miles in tanks on trucks. By: Sam Cook, Duluth News Tribune Read the article - click here .
1 comment
Read more

Between 04/02 and 04/05, cold nights resulted in morning water temperatures of about 38 degrees, warming to the mid to upper 40s by the afternoon along the Lower Shore.   Interviewed anglers caught 9 Kamloops and 4 steelhead.   The lack of precipitation has kept rivers running low and clear.   Anglers are seeing many fish in the rivers but most report slow fishing.   Along the Middle Shore, morning water temperatures were in the mid to upper 30s while afternoon temperatures reached the mid 40s.   Water levels were falling and becoming increasingly clear.   Interviewed anglers caught 6 steelhead, 1 Kamloops, and 1 brook trout.   Along the Upper Shore, flows in the smaller streams dropped considerably, but the larger rivers maintained reasonable flows throughout the week.   Clear water conditions now prevail in both large and small tributaries.   Upper Shore water temperatures rose quickly within the past few days, reaching the mid to upper 40s in the afternoons.   Fish were observed
Post a Comment
Read more 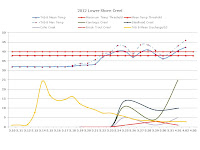 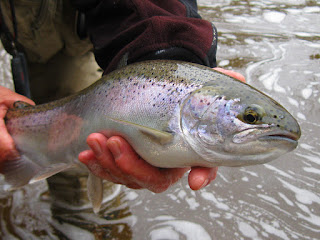 Between 03/30 and 04/01, cool weather conditions resulted in cold water temperatures and reportedly tough fishing conditions. Water temperatures along the Lower Shore were approximately 38 degrees with all rivers running low and clear. Interviewed anglers reported generally slow fishing, but caught 25 Kamloops, 10 steelhead, 5 coho salmon, 1 brook trout, and 1 brown trout. Along the Middle Shore, stream temperatures were between 33 and 39 degrees with water levels dropping and also running fairly clear. Interviewed anglers caught 7 steelhead, 4 Kamloops, 2 brook trout, and 1 northern pike. Along the Upper Shore water temperatures were in the mid 30s and rose to only 40 degrees on Sunday afternoon. Despite some light precipitation, water levels were falling but not running as clear as streams farther down the shore. Overall fishing pressure was fairly light and interviewed anglers caught 5 steelhead and 1 Kamloops. Trap totals through April 1 st are 99 steelhead and 6 Kamloops at th
Post a Comment
Read more