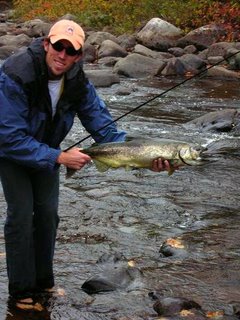 Quick update, I stopped at nearly every river from the Lester up to the Indian Reservation last weekend. It was mostly a leaf watching and hiking weekend but of course I brought a couple rods along.

The pinks were in every river with enough water. A lot of them are in rough shape but you still can find fresh fish if you look around. A stop at the French revealed a pool full of chinook, so I took my time at a nearby river and finally spotted a mongo buck holding in fast water near cover. He absolutely smashed a purple esl. It was my biggest king in my two years of fishing the north shore.

I continued up the shore and found many pinks but the kings were indeed rare. The remaining kings I spotted on Saturday were much smaller and hanging out in slow pools. I never have much luck without current. On Sunday a fish bigger than the surrounding pinks materialized at the head of a strech of deeper gravel on a mid shore river. A dozen casts later I was tied into a fresh, fat little hen chinook.

All in all it was a great trip, the leaves were beautiful, the hikes to the waterfalls were awesome as always, and I snuck in a few nice fish to boot. ~Jesse

Anonymous said…
Nice King. Wondering about the fly you used - purple esl. I am always interested in new patterns. Thanks for not spilling the river location. Even though some want to know the exact spot....it is good we all spend time to find our own "secret" holes. ~ TBum
2:44 PM