By NMF - May 24, 2013
Couple quick notes. I was finally able to run the temperature numbers for the Mid and as of May 25th, Upper Shore. Once again we're seeing the strong correlation between rising temps during the initial stage of the run and the point when upstream migration really kicks off. It's not quite as apparent in this chart because you are looking at the weekly means for Creel numbers, temperature and flow. When you break it down day by day, it sticks out like a sore thumb.

The point being that, as has been demonstrated by many years of MN DNR trap data, primary upstream migration of adult steelhead in numbers seems to be strongly correlated to average daily stream temperatures reaching approximately 38 degrees F, and that this is mostly independant of flow. So initially it appears that it is temperature which dictates upstream migration regardless of what the flow is. Once temps maintain above this initial threshold, subsequent pushes of fish are then dictated by bumps in flow.

That's not to say we don't get early steelhead moving in and out of the tribs, we are really talking about initial numbers. Note too that kamloops have a slightly lower threshold which is a big reason why we see a lot of loopers being caught earlier, with steelhead making up the bulk of the catch slightly later.

At any rate, here are the updated Mid and upper Shore graphics: 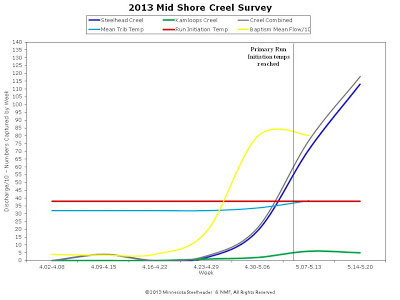 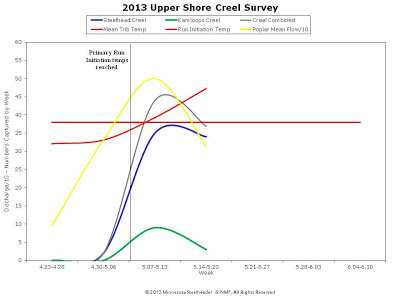