You know, it’s awfully hard to be optimistic some days. As I write this piece I can hear the wind outside; not your run of the mill gentle breeze, but the kind of wind which makes your house rattle loudly and shudder with each and every successive gust.

I have a large spruce growing just outside my door. I love it. The chickadees do too and use it as they dart back and forth between the feeders grabbing sunflower seeds, then quickly escaping back into the dense cover of the branches. Not because they are scared when people or the cats are sitting out on the deck (they’re not). They know the people dole out the free seed. And the cats well... they’re just fat and slow and the chickadees know it judging by their antics. 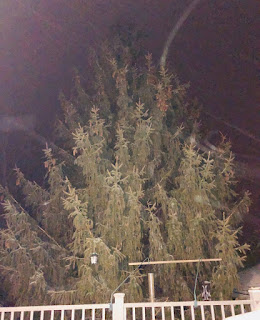 The cooper's hawk is a different story. She’s taken to hiding high up in a nearby maple, launching periodic aerial assaults on any unsuspecting bird foolish enough to sit for more than a few seconds on one of the feeders. The chickadees are the tacticians, but judging by the feathers and occasional dis-articulated wings lying under the maple, it’s the jays that need to learn the effective use of cover.

After a particularly violent gust, I flipped on the deck light and looked out to investigate a loud rattle followed by an unusual thump. The spruce was waving and soughing wildly as spruce and pines do in a strong wind, but it wasn’t that which got my attention, it was the snow.

I’ve only seen snow like that one other time in my life. I was high up in the Canadian Rockies on a September hike when we got caught in a storm. The only way I can describe it would be to say it was snowing really big Dippin’ Dots. Not ice pellets, large perfectly spherical snowflakes.

"For f#@%’s sake" I thought to myself as I looked out the window into the night, "sideways dippin’ dot snow"....

Sorry, but given the fact it was nearly 3 a.m. on April 14th, a time when I am ordinarily rolling out of bed (most years) to go steelheading, it seemed like a most appropriate expletive to use. 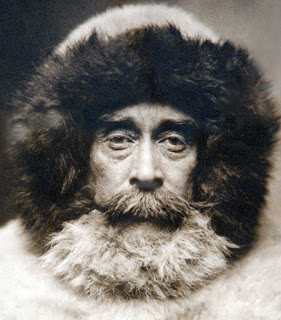 When I was younger, I would have laughed in the face of this storm. I’d spit in its eye and strap on some snowshoes, or commandeer a dogsled team and race north Ala Robert E. Peary just to fish the one lone slot of open water in an otherwise ice-covered stream. 50+ trips around the sun have tempered that fire a bit, but it still smolders. Plus I wouldn’t look so ridiculous sporting that bad-ass feather duster of Peary’s today as I would have when I was in my teens and 20’s. I’d be just another of those grizzled, mustachioed vets I used to look up to in awe, standing along-side of the Knife with snow-covered shoulders, mighty icicles hanging from their faces, showing the young bucks how it’s done. Well, some days anyway…

50+ trips does provide perspective however. All that time on the water coupled with today’s modern technology allows one to observe and explore in a way Peary could only dream of. I can crack open satellite imagery and tell you that despite the previous storm back in early April, things have started moving again. 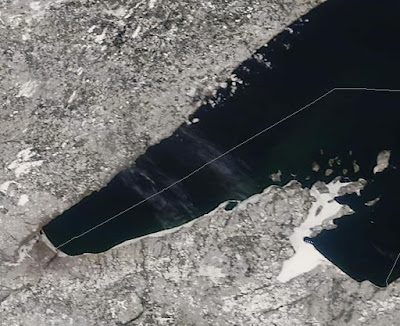 Despite what it looks like on the ground locally, we are seeing signs of brown-up. The false-color imagery confirms this in the way of ground-cover temperature differences. 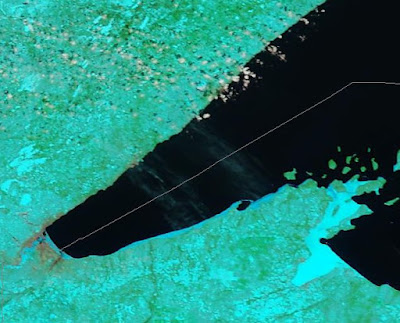 We can also tell you that while this latest round of cold and snow will most definitely delay things a bit longer, we’re seeing signs that we have hit an important tipping point. It’s probably worth discussing the current flow and temperature data because there are some subtle differences which provide reliable indicators as to where we are at in any given run.

As of now, we are most definitely in the pre-run phase. We know fish are staging, and from the MNST Creel Project data provided by you in the past, we know that something like 10% of fish reported annually to MNST creel are caught during this phase. Believe it or not, reports are trickling in so thanks to those of you who have already submitted.

We also know this phase preceding major up-bound migration can last up to 5 weeks; much shorter if we get a rapid warm-up. This year we are likely looking closer to that 4-5 week benchmark overall. Point being we are in it.

When we look at the flow and temperature data, the key indicator for initial pre-run phase looks like this: 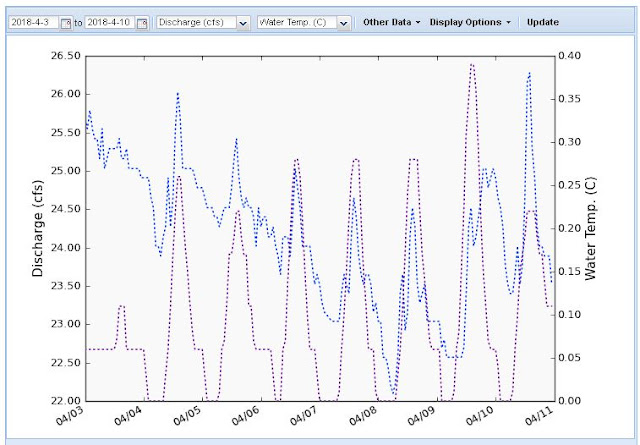 What you are looking at are daily measurements of stream-flow and temperature superimposed over each-other. With longer days and higher sun angles, the sun is warming smaller areas of open water. Suspended sediment, exposed rocks, and the stream-bed not covered by ice all absorb solar radiation during the day. This is released as heat back into the water. The temperature difference is subtle, only about 1° F here, but important to the process of opening up the streams. If you were to pick a stream photo representing this phase, it would look something like this (maybe a little more ice-cover): 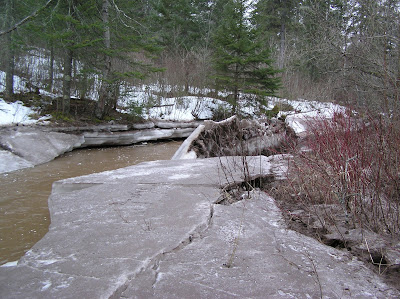 One thing to note about this early marker: Note how the daily spikes in flow and temp are mostly aligned with each other. What this is telling us is that the increases in flow are coming directly from melting occurring in the stream itself. This is what we are seeing right now in most of the larger streams along the North Shore except for those on the farthest Upper Shore.

The next important marker looks like this and is in fact occurring now on some of the smaller North Shore streams. 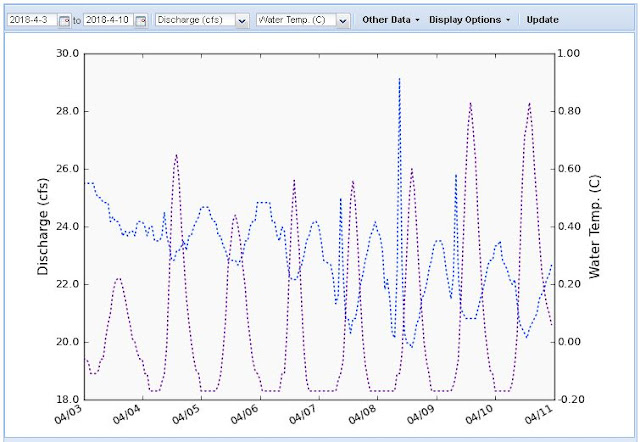 These streams are more open with less ice-cover at this point. We know this because the daily spike in flow is lagging behind the daily temperature spike. There is less melting in the stream due to less ice available at this point, but runoff from snow-melt in the surrounding river valley is increasing as brown-up accelerates. It takes longer for this snow to begin melting every day, travel downhill as runoff, then hit the stream and contribute to flow. This is why you see the lag between peak stream temps and peak flow. Melting stops at night as air temps dip below freezing which slows the volume of runoff leading to the subsequent dip in stream temps and flows. If you were to pick a stream photo representing this phase, it would look something like this: 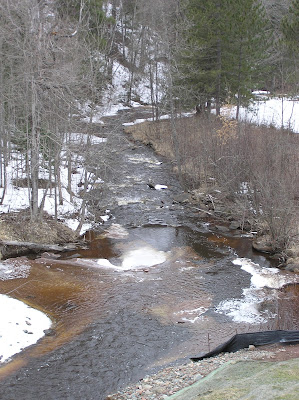 Small areas of overhead ice, maybe some anchor and shelf-ice remaining, but lots of open water and exposed stream-bed with more exposed ground along the banks and in the river valley.

Our next important marker will be apparent when both the base flows and base temps get higher and higher each day. When you see that, you’ll know major migration of steelhead is very close.

One last point of note here; all of this may sound unrelated to fishing, so here are a couple tips on using the data. When you see a signature similar to the graphic above, it’s a good bet there are some fish in those streams, particularly if the base temperatures and flows are increasing each day and you can find open water.

Steelhead are creatures of metabolism. When you see stream temps are in the 0.55-2.2°C/33-36°F during this phase, it tells you a lot about not only where to fish in any given stream, but also the time of day most conducive to catching fish. Steelhead will use and hold in slower water at these temperatures, expending the least amount of energy possible. Fishing inside bends, guts of pools/runs and other slack water will pay off. Fishing afternoons is typically more productive at these ranges also as the fish will be more active in the slightly warmer stream temps in mid to late afternoon. If you read the MNDNR Creel reports carefully, you’ll see this afternoon effect reflected in the comments.

The last thing to note here is that while we all chomp at the bit when we get one of those sunny days into the 40’s or even 50’s, this can actually spell near-disaster during the pre-run/early run phase. It all depends on how much snow we have on the ground at the time. While those suddenly-warm days are a welcome relief after a long winter, large volumes of runoff from rapid snow-melt are dumping lots of near-freezing water into the streams. What one day was water temperatures in the mid to upper 30’s and active fish, can suddenly tank temps to around 32-33°F along with producing high if not blown-out flows for days. Where not blown out, these fish tend to develop lock-jaw at suddenly lower temps. Carrying a thermometer, finding warmer water and adapting to conditions are critical to success in these situations. It’s not that you can’t catch fish in these conditions; you just have to think about what is going on and adapt.

We’ll keep our eye on things and try to keep you updated. Here’s to warmer days ahead.

HammyDavisJr said…
Thanks for the update, it's always appreciated. Going to head up mid next week no matter what and put some eyes on the situation in Grand Marais. Worst case scenario...we see some beautiful scenery and drink a lot of coffee while driving up and down the shore. :)

HammyDavisJr said…
Thanks for the updates, it's always appreciated. I think we're heading up next week to Grand Marais no matter what. We just need to put our eyes on some moving water and start putting this ridiculous winter behind us!
7:10 AM