A Quick Note on Temperature

By NMF - April 26, 2015
Once again in 2015, we are seeing the strong correlations between the reported run initiation temperature and the initial upstream migration of steelhead and kamloops.

The various stream packages have been giving us fits because they have been up and down, partially running, not running, fully running... sometimes all variations on that theme for any given day. At any rate, here is the best we've been able to come up with given the unpredictable nature of the available data: 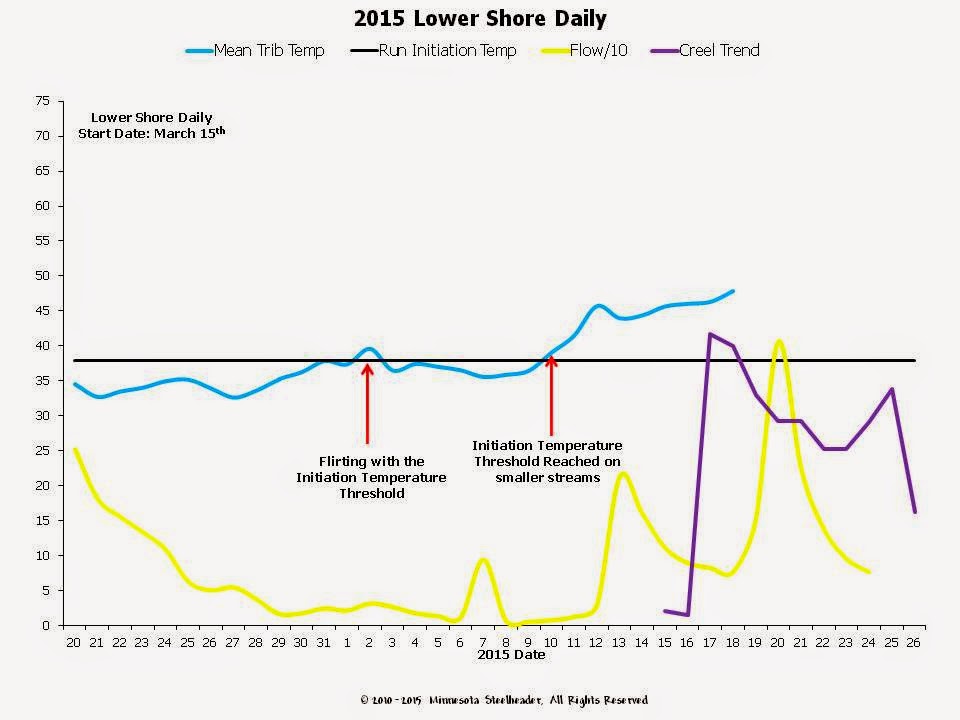 We started tracking daily numbers back on the 15th of March after we started seeing movement in the ice. On April 2nd we began flirting with the reported run initiation temps, but didn't get too excited simply because there was still so much ice around along with snow-pack up in the highlands, and underneath conifer stands still waiting to melt. We assumed temps would tank with remaining melt slowing things down temporarily, and that appears to have happened.

On the 10th, small Lower Shore streams reached the threshold, but we typically don't see significant run activity until several days later when streams such as the Knife reach the same point. The storm on the 12th dumped enough warm precipitation into the streams to really get things going, and from there we've seen significant increases in creel trend.

Unfortunately we lost our temp feed again, so we cannot illustrate what's been happening the last few days in that regard. What we do see is that once the initiation temps have been met and maintain at or above that threshold, flow seems to take over as the primary influence on subsequent upbound activity. Increases and decreases in stream temps continue to have an effect, but it's more about where the fish locate in the stream, and how active or inactive they become; all of which affects your presentation and approach from day to day as conditions change.

We are tracking all three regions, and will do some analysis as soon as we have some decent data. Until then, keep sending us your creel reports, the information is invaluable and greatly appreciated!