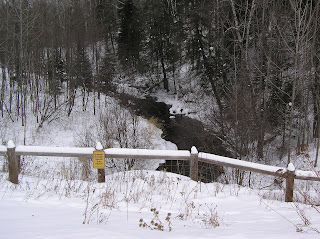 Well everyone, in case you haven't noticed, it's MARCH! Which means that steelheading is just around the corner, even if it seems like the snow will never end. If you haven't already, it's time to get your gear together, patch those waders, finish tying flies or spawn, and quit dreamin' about seeing that first enormous square, spotted tail distorted by a boil the size of a garbage-can lid.

For me personally, I can't wait to step out of the car and get my first whiff of cedar mixed with balsam. To hear the sound of breakers over the the rush of snowmelt-laden water; or to see stars so thick I can't tell where the sky stops and water begins on the big lake.

Let's face it, whether you catch a fish or not, we are blessed with incredible opportunities every spring, and steelheading is so much more than simply fishing. We encourage you all to take at least one opportunity this year to pass along a little of what you know to the next generation. Whether it's a son or daughter, niece or nephew, or maybe it's the neighbor kid whose parent (or parents!) are away serving our country in the military; you can make a big difference in their lives.

As for me, it's time to change gears and shift into watch-mode. Nothing moving here yet, but I'm seeing the first hint of signs. The ice-out has already begun in SE Wisconsin, and is progressing north-westward slowly but surely. The male chickadees have begun singing their spring songs on warmer mornings, and the cardinals can't be too far behind. So I'll be keeping a much closer eye on conditions, my ear to the ground, and getting out actually scouting as time allows. You probably won't be hearing much from me over the next two weeks or so, but only because it's but the deep breath before the plunge. Until then, start getting ready because all to soon it's going to be time to, as the Hanson Brothers would say, start "Foiling Up". 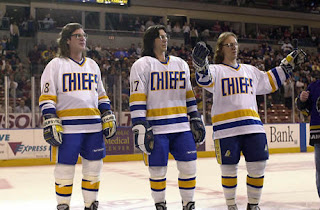 I'll talk to you later, I gotta go put a fresh coat of varnish on the snowshoes, I think it's gonna be one of those springs...

FISH TALES said…
so you guys get summer runs? or is it considered a spring run? Im really feelin ya on spring.. I,ll be sure to take a kid fishin- so I wouldn't mind seeing a post about your strain and runs of fish, size, run timing, hot flies.. That is if im not being too bold asking for you to write a certain style post.. like for instance, what is tying sucker spawn..? I just love everybody elses steel as much as mine- Brad
3:51 AM

Mike Swan said…
Hi there! Wanted to drop a liine. I reviewed your site last year before fishing steelhead in the Bois Brule. Wasn't a good spring for the steelhead with the weird thaw. While I saw some steelhead, they weren't having anything of it BUT I did catch some brooktrout.

In any case, I am trying to hit to MN for a shot just as soon as possible to try for some kamloops. I would be interested in reading any thoughts you might have in trying to go through the ice - which I believe would be way fun. Anyway, thanks for keeping us posted! Tight lines!
4:49 PM

NMF said…
Mike: Loopers generally stage just offshore through the winter months prior to running the tribs. Through the ice is possible, but it involves a couple BIG ifs. IF there is ice on the Big Lake, and IF it is thick enough and IF it is not moving, then yes; ice fishing for Kamloops can be done and fishing can be quite good with the occasional coho thrown in.

The good ice doesn't happen with any reliable predictability, and it's usually a, "Here today, Gone tomorrow" kind of thing.

It's more common for people to shore cast using a variety of presentations: Floating slip rigs and variations on looper bugs/jigs/colored hooks etc. below floats. Spawn, crawlers and waxies fished off the bottom from Bluebird Landing south along the coast and off the river mouths is most common.

Less common are those who fish various types of nymphs/wet patterns stripped in the river outflows and seams, but it does take fish. Best bet is to contact the local shops and politely inquire as to conditions. Great Lakes Fly Shop 218.740.3040 & Chalstrom's Bait 218.726.0094 come to mind but there are others
Regards

NMF said…
Fish Tales: Our fish are spring run. The closest we have to a "summer run" are the skamanias that occasionally run in August over in SE Wisconsin, but that's Lake Michigan.

Steelhead were imported to Superior in the 1880's and after later being stocked in several MN tribs, expanded throughout the coast. After the population crashed in the early '70's, much of the genetic adaptation of the prior 90+ years was lost and remaining naturalized stocks were heavily supplemented with fish of Manistee origin. Today the fish are considered to be Knife River strain as the primary origin of stocked fish come from the Knife River with the secondary source being the French River just a few miles down the road.

Not sure what you mean by size… Run (size) returns to the weir at Knife River have averaged about 400 fish over the last 15 years with the 2010 returns to trap just under 700 adults. The actual return was likely slightly higher owing to trap inefficiency. This total represents something like 14-15% of the estimated historical average return to Knife River prior to the population crash. Size-wise our fish average right around 26” with fish up to 32” sampled on occasion. Lake Superior is deep, cold and sterile which tends to slow down the growth rates of these fish, hence the smaller relative size compared to other fisheries.

Steelhead in MN are strictly C&R as part of the population recovery strategy. As such the DNR also stocks Kamloops rainbows as a put-grow-take fishery in part to take pressure off of naturalized steelhead stocks. These fish were originally Pacific-coast origin steelhead which were trapped in the interior regions after glacial recession and developed as a unique lake phenotype, but still run essentially like steelhead.

As for run timing, the MN coast is large enough from north to south that we get runs from April right on into June at times. I won’t even try to answer the “hot fly” question because like everywhere that steelhead are pursued, you can ask 50 different people and get 50 different answers. I will say that people do use a lot of yarn, or what our good friends just to the north would call wool. Basically it’s an egg pattern for all intents and purposes but has a funky translucent quality to it, comes in a million colors and can be doped with scent or fished in conjunction with spawn, waxies or what have you. If you’re looking for specific regional patterns I would have to say that the Superior X Legs and Looper Bugs would fit that bill. If you really want to go old school, you’re talking about a Lazy Ike in the frog color-scheme or colored sponge cut to look like spawn/skein and doped with anise-oil.

As for sucker spawn: That’s a pattern that developed further to the east of us in the Erie/Huron basins as far as I’m aware. Basically it’s a pattern which imitates the eggs of suckers, which spawn at approximately the same time as steelhead and the fish will eat them just as readily as any other free-floating egg. The pattern itself can also imitate steelhead eggs and when tied with the original angora yarn, also takes on a realistic translucent quality. Here’s a link that illustrates the pattern: Sucker Spawn