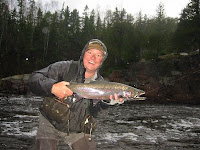 Fished the middle to upper shore Wednesday (4/28) thru Saturday AM.

The water conditions on many of the rivers were low and clear. Water temps ranged from 42-54.

Wednesday was slow with my Dad hooking 2 fish, landing 1 on a Chartreuse Sucker Spawn and I landed one, also on the Chart. SS.
Thursday and Friday were quite a different story.
On many smaller rivers fish were visible and podded up but were not interested in any offerings. Paired fish on redds were left alone.

Due to warmer water temps I needed to change it up a bit so I tied on a #6 Woolly Bugger and my third swing was met with a vicious strike. A mean and ugly 26” male was soon in hand. I stuck with bugs and the big brown and black buggers really produced. In those 2 days I went 15 for 22 with only 3 fish not taken on buggers. Those fish were taken on a Freight Train and a unnamed bright colored wet fly.

The majority of the fish were fooled on the dead drift with rest coming via the swing. I used Type 3 and 6 sink tips in deeper pools but due to the low water that was only necessary in one or two areas. Every large fish caught or hooked made no doubt they were after my fly. The strikes were brutal and the fights intense, with one fish leaping 9 times!

I did not see many bright fish most had tremendous color as evident in the photos.
In addition to the Steelhead, many smaller smolt were caught along with numerous Brookies and the occasional sucker. The water was coming up as I was leaving on Saturday.