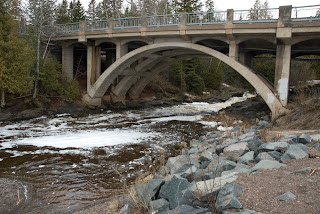 It looks as though the weather is improving this week.

The mild weather this past weekend brought out the anglers on the lower and a few middle shore Rivers. The highest fishing pressure was at the Lester and French rivers respectively. The Knife had it's share of anglers as well. The mouth of the French River has produced several Kamloops the last few days, but it is still reported as slower than usual. The DNR reports that the Lester has produced equal numbers of Kamloops and steelhead, but again fishing has been pretty slow.

The highest fishing pressure on the middle shore over the weekend was at the Stewart, Split Rock and Baptism rivers. Anglers reported catching a few steelhead on the Split Rock and the Baptism. Water temperatures have been reported in a wide range - low 30's with some rivers reaching 40's by mid afternoon.

A report form the Grand Marais area rivers is not a promising yet. As of Sunday evening much of the area rivers were still locked up in ice in upstream areas. Angling pressure was well.....we didn't see any. One contact said it is still to cold, to much ice and no fish have been running.

The DNR also reports that the water levels appear to be coming down on most of the rivers now. There is still a lot of snow in the watersheds in many of the rivers however.


The Knife River trap caught 10 steelhead, while 65 Kamloops and 6 steelhead were caught in the French River seining operation.

Click on the "comments" below to add or view current reports/conditions.

Anonymous said…
A few of us MN Steelheader staffers are heading up the Shore Thursday Morning. Our plans are to cover the whole Shore, conditions permitting. Saturday night should find us in Grand Marais enjoying a malted beverage or two at the Gunflint Tavern. Stop by and share a tale & a brew. We will provide a complete fishing/conditions report on Monday.

Donna and Michael Lebsack said…
So how did the exploratory trip up the shore go this past weekend? I didn't have much time but I did manage to find 43F water temps on Sunday and caught one Steelie just before the thunderstorms. Kinda wild as I hooked up just after the first flash of lightning.