One of the things that took me a long time to get my head wrapped around was that in my early steelhead formative years, I operated exclusively under the idea that flow was it; like flow was THE THING baby! Flow goes up, go fishing was my mantra.

Now that is a fine rule to live by, except there were these years where I'd be out early in the season, the flow would be killer, and I couldn't buy a fish to save my life. And then there were years where, again early in the run, I'd be fishing out of necessity. Given a choice based on flows, I never would have been out there, but you fish when you can when it is your only opportunity. So given the absolutely dismal flow, and I'm talking like in the 50cfs range on the Knife, steelheading was gangbusters. So what gives?

Being the data-junkie/techno-geek I am, I started spinning all of the data and literature I could get my hands on. Those were the early years before I got my act together and built the front-end analysis tools I use now, but.... sorry, I'm probably boring you to tears already. GET ON WITH IT CLAVIN!

Anyway, long story short, that was the point where I started paying very close attention to the MN DNR's trap data and literature.

The result was that it explained the whole reason why you would get those odd years which just could not be explained by the "Flow is the Thing" school of thought.

Rather than explain, I'll let the data do the talking. Here's the day-by-day breakdown of the Upper Shore creel project: 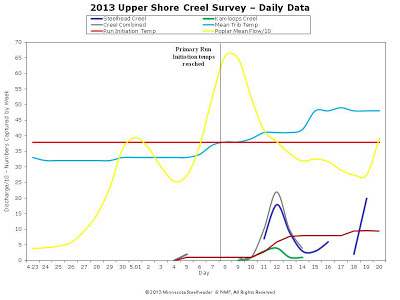 Don't get too wrapped up in the gaps in the fish numbers caught. What's important is the point where the avearage daily trib temps hit the initiation threshold. The catch trend (magenta line) just makes things a little more intuitive. Note that catch doesn't really get cooking until the stream temps hit that point.

There's a slight lag between initiation and catch numbers simply because the sample stream is small and tends to warm more quickly than the Upper Shore region in general.

At any rate, with respect to fishing in the tribs themselves, temperatures reaching the initiation threshold trigger the primary upstream migration of adult steelhead. Once temps maintain above this point, subsequent bumps in flow will bring in succeeding runs. You can see this to a degree with the bump on the 18th and 19th of May.

The working theory now is: "Temps are the thing, until they're not, and when they're not, it's flow baby" or something like that...

What does that mean to the average steelheader? Probably not much if you can get out there every day. There certainly are fish around prior to that point, it's just that numbers are much lower than after the point where temps hit. For the steelheader with limited time on their hands? Makes a huge difference knowing when your best shot at fish is, particularly if you have a short window and have to both plan as well as travel.

More to come as soon as I get some more data, but I thought that you might be interested to see why I continue to post these charts and blather on about this topic from year to year. What I'd really like to know is whether this same phenomenon applies to say, WI tribs and steelhead as well as the North Shore fish.