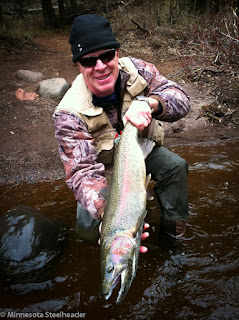 This time of year on the North Shore often feels like a ghost town when it comes to spotting fellow steelheaders.  Over the years I have found that once the Month of May hits anglers simply are not out like they are during the first April push of fish, or in this crazy spring - March push.  Still trying to figure this out.  Maybe people are discouraged from the news of poor creel reports or the perceived lack of water.  Based on experience and following flow and run charts, yes the same charts we link and post here, this time of year can be a steelheader's dream.

Maybe anglers think steelhead are like the smelt run,  within a few days it is done.  This is so far from the truth!  If fact, if the weather pattern stays the same along the North Shore this spring, I bet a few fish will still be around Memorial weekend.  That is well over 2 months of steelhead action!  Sure they are harder to find than standing in the lagoon on the Sucker River during the 2nd week in April, but fishing for active steelhead, in warmer water, without frozen fingers, is a pretty neat and rewarding experience.

Pictured here is a 29" buck caught on an upper shore river on the mid morning of May 5th.  He was caught in some nice 49°f pocket water on a 43°f overcast morning. This spot looked too good to quite  and subsequently gave up 3 more fish out of this little 14' pocket.  These were not lethargic fish either I might add. All nice steelies!

For those that will read this in the future, the 2012 season was a few weeks earlier this year due to an unseasonable dry and warm winter. In fact in my 30 years on the water this is the earliest spring run that I can remember.  More of a reason the average Joe would not expect to catch fish this late.  Do not under estimate the late season my friends and keep an eye on the flow and run charts.

Anonymous said…
another guy that says he's fished for over thirty years.
8:43 AM

NMF said…
Would you care to elaborate on exactly what your argument is?
5:33 PM