We use the daily trends as our primary means of:
Note the red arrows at various points on each chart, these will be discussed, and each point will be noted by a corresponding text highlight at the start of the paragraph. In other words simply jump from the discussion to the chart, find the corresponding date, look at the humps and bumps in the data


Annually, once we start seeing signs of ice-pack movement on index streams in February and/or March, we begin tracking the stream temps. As Creel reports start rolling in, we track those trends against the daily temperature and flow values which results in the Daily chart below.

2014 Mid Shore tracking began in late March but as with the Lower Shore, our first reports did not come in until April 12th. These were all early fish comprised mostly of steelhead.

On April 19th, the daily high stream temps began flirting with 40°F and generated some steelhead movement. To be sure there were already fish in the streams, but we had reports from the area of several stream mouths where anglers observed fish entering the stream and moving up.


On April 23rd, both daily high and average stream temperatures dropped with a corresponding reduction in catch trend. Absent any studies of flow and adult fish movement on our Mid Shore index stream, we are unsure of the flow values above which limit up bound movement; it appears the decrease in trend is solely due to reductions in water temperatures. We just cannot say for sure.


On May 1st, daily high stream temps again crack the 40°F and generating both steelhead and some Kamloops movement with catch trend increasing accordingly.


On May 6th, the average daily stream temps finally maintain the initiation threshold, and catch rates of up bound fish begin increasing from that point on. A significant precipitation even occurred between the 8th and the 10th with discharge reaching the 1,950cfs range. This likely is above the limiting value for up bound migration because we see a slight reduction in catch rates. However, as is typical with our North Shore spate-streams, up bound migration wasn’t suppressed for long.

On May 11th, flow-values were falling through roughly the 1,200cfs range and catch trends increased. Another precipitation event occurred which probably increased flows above the limiting value. This suggests at least for this stream that the up bound limiting value is roughly in the 1,300cfs range. By the 14th, flows had dropped below 1,300cfs and we saw another spike in catch trend. Again you can see the sharp effects of precipitation on a spate-stream in the chart as flows tend to rocket up and down with precipitation.

On May 19th, we see another precipitation event which presumably triggers a wave of new fish. Flow and catch rates begin to decline from this point on with our last reports coming around the 31st. As with the Lower Shore daily chart, the creel catch is a trend, and not actual numbers of fish caught. In other words the spike on May 9th doesn't equal 40 fish reported, the actual number of fish caught and reported was actually much higher. 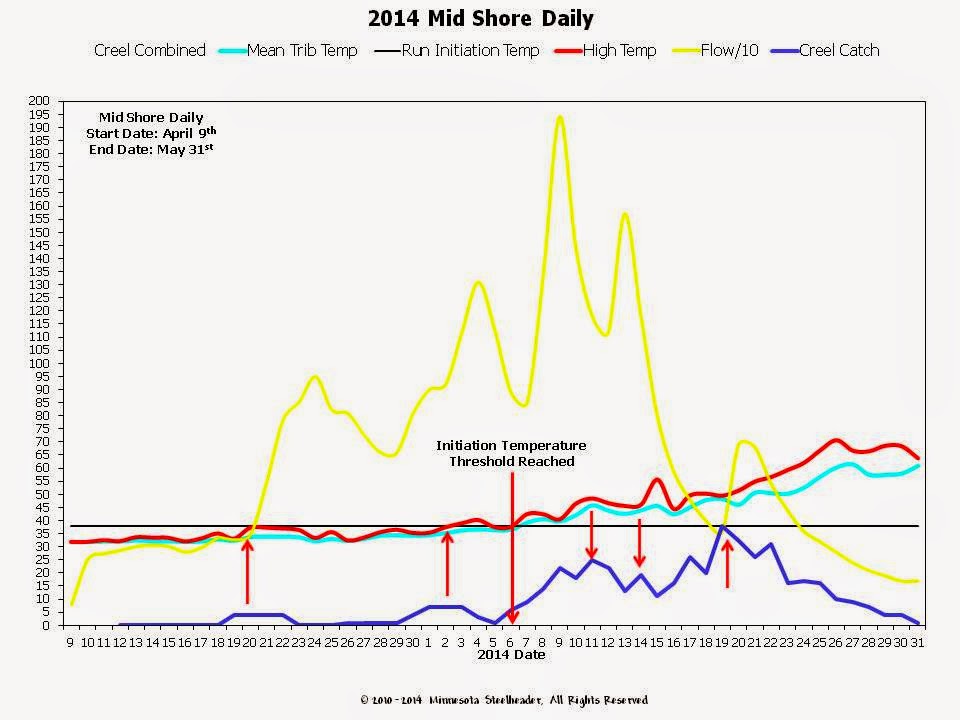 
We use the weekly averages to:
Full ice-out occurred in very early April. Following May 7th when the initiation temperature threshold was met, catch trends for both steelhead and Kamloops increase, but here you can see the likely suppression of up bound movement due to the average flows most likely being above the limiting value for the week of May 7th. As flow values drop, we see peak creel occurring the week of May 14th.

On a side note, both Mid and Upper Shore kamloops numbers remain low. This illustrates the effectiveness of the Minnesota DNR’s kamloop stocking methodology. While there clearly is some straying occurring, limiting stocking of kamloops to Lower Shore locations with the goal of reducing genetic introgression (kamloop-steelhead cross-breeding) appears to be working given the low numbers returning to creel. 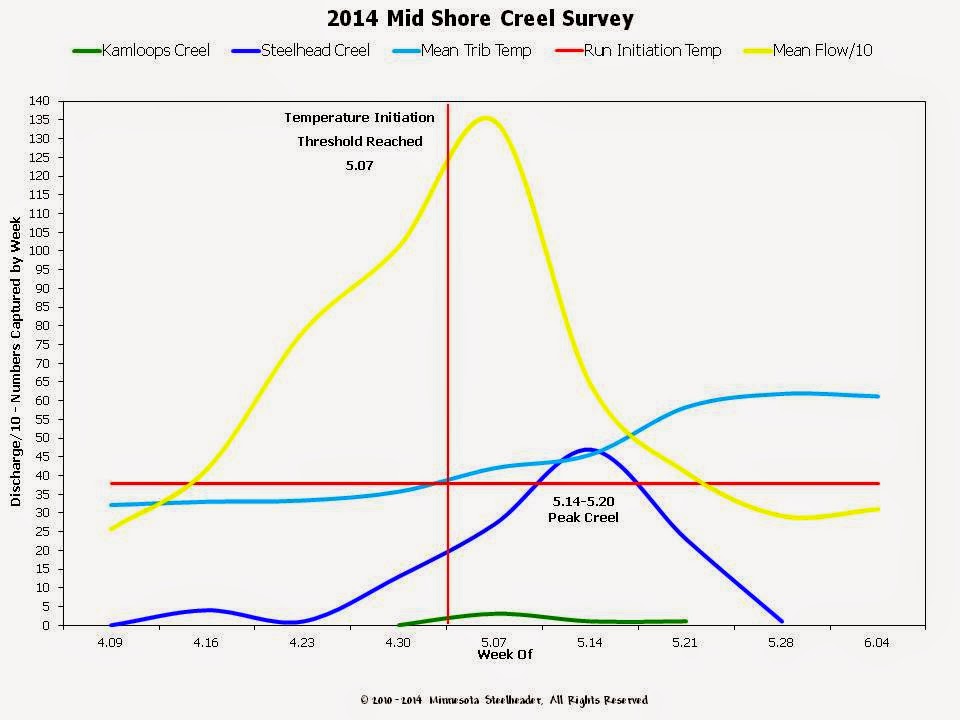 We use historical creel numbers to:
In the simplest terms, the historical data illustrates the earliest and latest dates fish have (reportedly) run for each region of the shore. While it's not a crystal ball by any stretch of the imagination, it does give you a framework for when to expect things to happen from year to year. Given enough time and data, what you also see are some well defined markers for peak returns. All we do here is to smoosh all of the annual data we capture for each region of the shore into a unified historical picture.

As of 2014, we still don't have enough data for this to be illustrated with any clarity. The Mid Shore is also a bit of an enigma, there are things going on in the historical numbers which simply leave us scratching our heads which only time and data will clarify. Again, the whole point of the historical chart is to present a one-stop shop for: 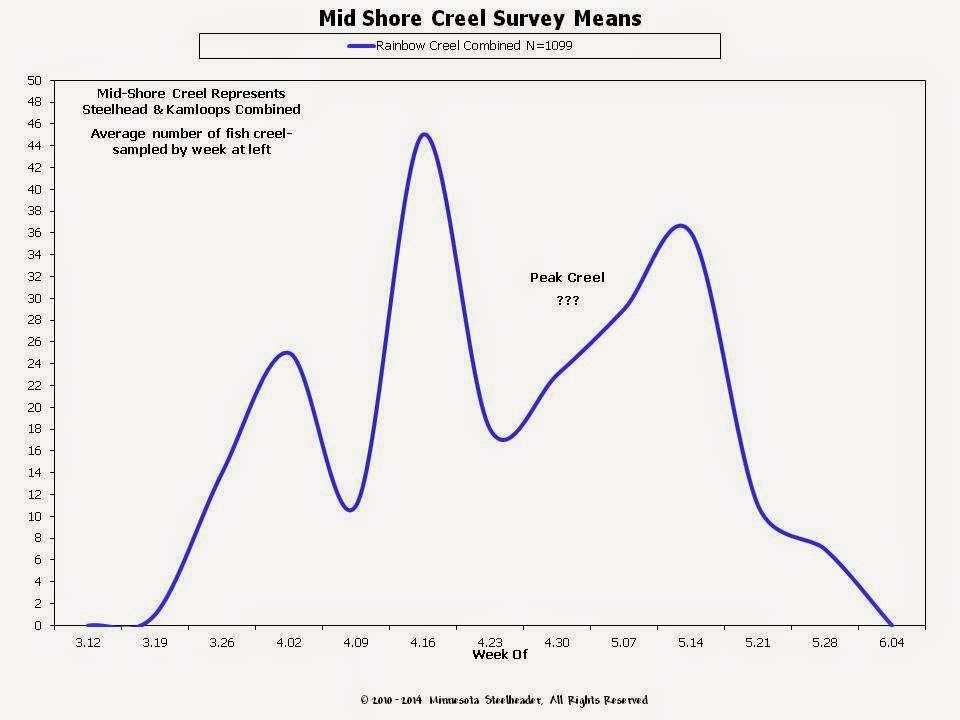 We run progression numbers to:
The Historical means show you what to expect in any given year as you look forward. The annual creel and trap validate ideas regarding initiation temps and are the basis for other information. The Daily data shows flow, temps and their affects on fish movement. It also gives you a very good indicator of what is occurring and what is about to happen locally in any given year. The progression is a planning tool for you to use to position yourself to be a more effective North Shore Steelheader. Without rehashing too much, and since this is a crazy-long post already, you can read the nuts and bolts here:
Run Progression 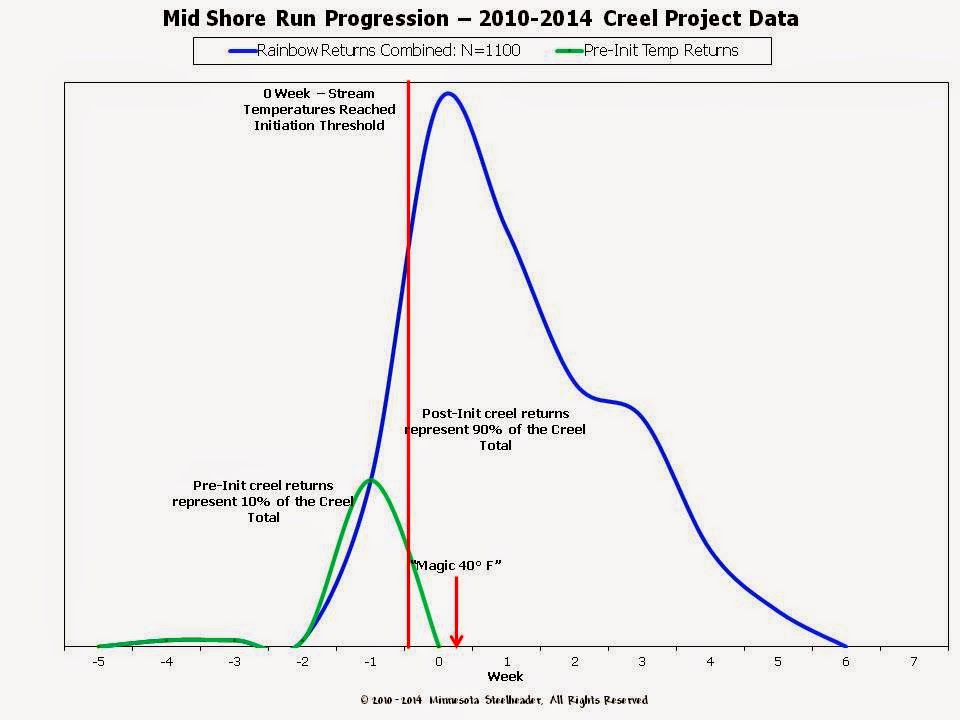