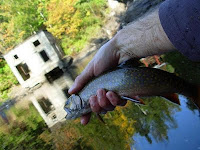 Here is a great read from Dennis Anderson, Star Tribune outdoor writer and editor. It helps bring a little more light on the Lutsen - Poplar River water pumping issue.
Minnesota Steelheader is not interested in political slants or emotional opinions on this subject.  You will have to go somewhere else to read that junk.

Fact: A designated trout stream is turning into a dependable water source for a local growing business.  We want the bottom line answer:  Could this pumping of water from the Poplar have a negative impact on the brook trout, rainbow trout and salmon fisheries? If yes than we feel Lusten needs to find an alternative water source or reduce water consumption to levels that would not have any negative impact to the fishery or watershed.  If no, well... it is hard to believe a study will show conclusive evidence that the no harm is possible.

Here is a portion of Mr. Anderson's article.  we encourage you to click on the link below to read his entire article.

"Who speaks for resources that can't speak for themselves is at the heart of the nation's conservation dilemma. Having long defined mountains, rivers, prairies, fish and wildlife as commodities, we too often quantify their highest and best use as the ones that ring cash registers the fastest, and the longest. Aesthetic values by comparison seem a poor sister, and proclamations of their worth the tireless errands of idealists, fools, or both.

The mess at Lutsen, the North Shore ski area, makes the point. The owners there have sought this legislative session to legitimize what they have been doing illegitimately now for nearly a decade. Or if not illegitimately, without permission. Call it that. Without permission, beginning in 2001, Lutsen took 60 million gallons of water a year from the Poplar River to make artificial snow as cheaply as possible, according to the DNR. The ski area's permit called for 12.6 million gallons. In some years since, the extraction has jumped to as high as 108 million gallons, according to the DNR.

Notably, the Poplar River is a designated trout stream. In Minnesota, it's been illegal since 1977 to withdraw water from such streams. Lutsen has a waiver from this prohibition."