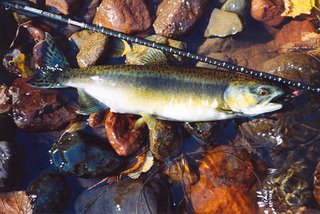 There have been a lot of rumors swimming around over the years as to how the Pink Salmon became full time residents of Lake Superior. We figured it is time to tell the real story.

It dates back to 1956 when approximately 21,000 fingerling pink salmon, on their way to a tributary to Hudson Bay, were unintentionally released into the Current River in Thunder Bay, Canada. These pinks were grossly underestimated. Critics saw these pinkies, aka humpbacks, as the least likely of all the exotic salmon to survive in the fresh water of Gitchigumi. But to much dismay, in 1959, two spawning pink salmon were caught in two separate tributaries, one in the Cross River and one in the Sucker River.

Since those first days back in ’59 our Pinks have been running the streams and rivers of the North Shore on a two year cycle. Yup, two years, that is it. During the 60’s and 70’s the Pink population exploded in record numbers. The dramatic increase in numbers was considered an annoyance by some and heaven to others. The impressive population peaked in 1979 and has yet to see similar masses.

In the 70’s the odd year Pink migration experienced a slight deviation in the two year spawning cycle. The pinks had established an even-year run. First recorded in 1976 in Ontario’s Steel River, the Pink Salmon continues today to spawn in even as well as odd years.

Since the initial introduction, the Pink Salmon has adapted quite well to its home in Lake Superior, reproducing naturally. The average spawning size each fall is approx. 13” – 15” long and weighing in at about a pound or so. The males develop a distinct hump on their back during the spawning run, hence the name humpback or humpy. The pinks also start to deteriorate pretty quickly upon entering the rivers, turning a green then blackish color. Upon entering the rivers, a whitish fungus also starts to grow on the skin and fines of the Pinks. This is a sure sign the fish are near the end of their life cycle.

Pinks are difficult to catch but, with the right technique and flies you just might get to experience what all the hype is about.

Feel free to contact us for more information on Pink Salmon or other North Shore species. Minnesota Steelheader and staff are here to lend a helping hand.

Some information was gather from “The Superior North Shore” by Thomas F. Waters 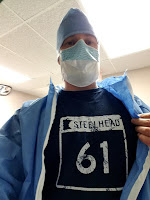 Moving through troubled times When this organization was started nearly 20 years ago, we set out with the mission to Inform, Inspire and Educate any and all who had an interest in this great fishery we call the North Shore. Since that time, Minnesota Steelheader has written hundreds of articles, started many projects and programs, adopted a river, provided numerous free clinics and seminars covering the full range of Steelheading opportunities in Minnesota, and participated in State Advisory Groups and scientific studies. Our visitors and followers have grown from just a handful in the US to now hosting tens of thousands of friends from Canada, Great Britain, France, Denmark, Poland, Ukraine, Belarus, and Russia. We are constantly humbled and greatly appreciate you all. You see, Steelheading is our passion. Minnesota Steelheader is made up of a group of incredible people. We are all volunteers from many walks of life who live and work along the North Shore as well as in other
Read more 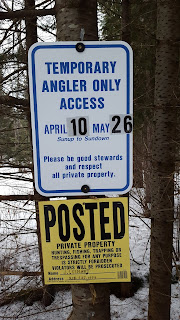 Lower Sucker River access update: The 2020 North Shore spring steelhead season is sure to be an interesting one.  As we post this update, some of the rivers have opened up though still too high to fish.  For those anglers who have enjoyed fishing the Sucker River over the years, we are happy to report another year of privileged access is available to us.  If you are not aware of the closure issue downstream-left at the scenic 61 access, please stop here and READ THIS .  After that, READ THIS .    For the 2020 spring season, the land owner is allowing angler access across his property from April 10 th – May 26 th .  This is always pending treatment of property by anglers. Signs are posted at the access point. Fishing before the 10 th is being monitored by conservation officers.  As you likely recall, access at this location was closed a few years ago due to the disrespect to property, property damage, and the level of annual litter.  This past year’s owner report was “the
Read more 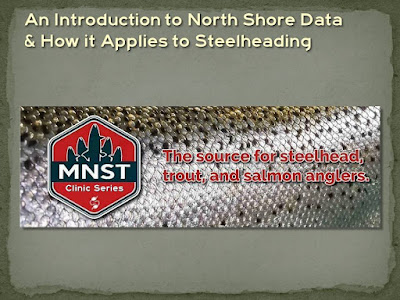 As we shelter in place, we thought we would do a deep-dive into the DNR and MNST data and try to explain how you can use the information to be a more successful steelheader. And perhaps, just perhaps, give your brain a little mental break from all the uncertainty and dread surrounding coronavirus...     As we've said before, the MNST Creel Project really grew out of a desire to understand what makes North Shore steelhead tick and by way of understanding, help us all to become more successful steelhead anglers. Conventional wisdom at the time was that stream flows were/are THE primary influence on steelhead migration movement during the runs. What we noted back then was that this held true on North Shore streams except for when it didn't; and those "When it didn't" years generated some spectacular early-season skunks along with a pathological compulsion to do the research and figure it out. Hey, we nerds like to catch fish too....     What we eventua
Read more