By NMF - March 26, 2016
As we said recently, we are watching conditions very closely and thanks to some early Creel Report submissions, we actually have some data analyze and post. A big MS Thank You to those who have already begun to submit reports, You folks rock!

First to consider and understand is that we again only have temp data from a couple small streams along the Lower Shore beat. While this is still invaluable, you have to understand that these streams warm far more quickly, and typically hit the initiation threshold 5-8 days before larger streams such as the Knife. Given the fact of early warming on small tribs, even these streams are not there yet:

This particular trib is probably the smallest of our data index streams, but even this one hasn't quite cracked 40 yet. 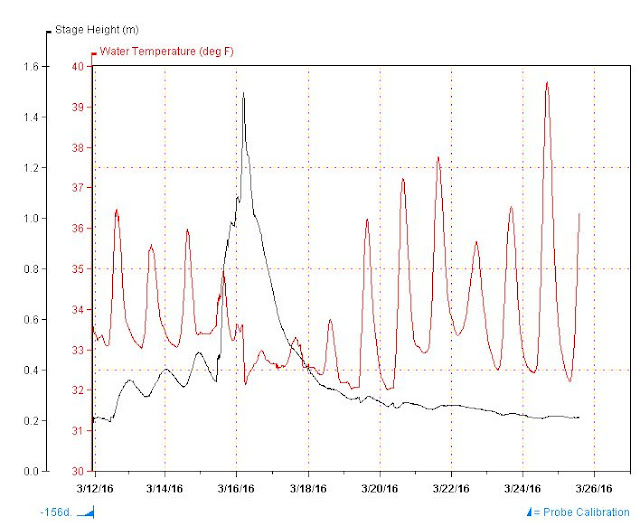 Our next index stream is a little larger, fairly comparable to the Sucker in size. You can see the effect water volume and differences in overhead cover make in the rate of warming; overall this stream is 1-3 days behind the one above. 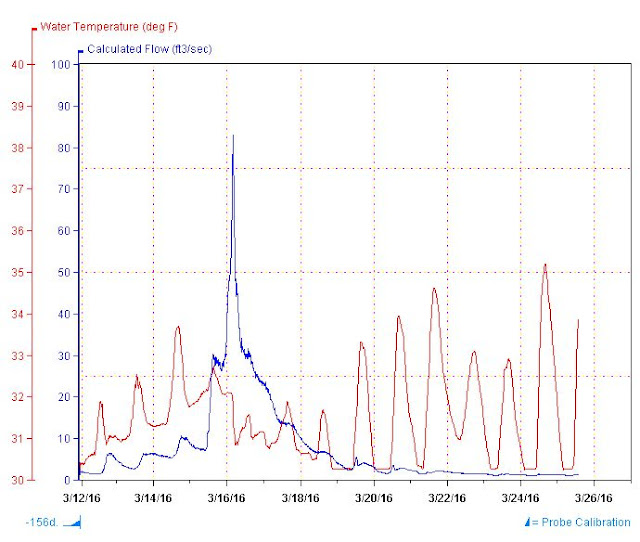 In both you can see the influence of the daily solar cycle on warming. You can also see how the  storm we got on March 15th and 16th affected stream temps and flows. Flows go way up, but all that cold water suppresses warming. Once it flushes from the system and we get some sun again, the classic heartbeat signature from the sun re-develops. Understanding these influences, particularly cold rain or snow once the run kicks off is important to steelheaders, you have to adjust your tactics to the conditions, cold rain or snow change how the fish behave, how much they move, where they hold etc. early in the run.

Even though we received a significant amount of precipitation, you can see how quickly it leaves the system. Streams on the North Shore, particularly on the Lower and Mid Shore are spate streams, that is they are heavily dependent on precipitation. They also rocket up and down quickly, so keeping an eye on conditions and adapting helps you succeed as a steelheader. 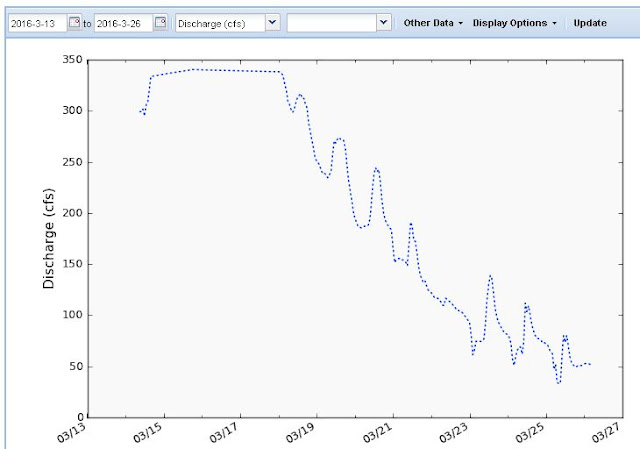 What you also see illustrated very well here is that as flow decreases, there's that classic early-season heartbeat signature. While the underlying cause is the same, that being the daily solar cycle, just remember that because we are looking at flow, the sun is melting snow and the melt-water hitting the stream is driving the heartbeat, not increases in water temperature.

The critical point here is that while the sun plays a part in warming the stream and jump-starting the run, it is also creating a problem. As the stream begins maximum warming in the afternoons while there is still snow-pack on the ground, all that snow-melt is dumping very cold water back into the stream which actually slows warming down. Keep this in mind as you fish during the early part of the run and you'll know what part of the day is the optimal time to try and catch fish.


Putting it All Together

As we said, we are already receiving 2016 creel data, so we hope you see and understand how useful it is. Your submissions help everyone become better, more successful steelheaders.

All of the same data above is here presented in a unified chart: Flow, Temps and Creel Trend. Past MS Creel Data analysis tells us that roughly 10% of adult steelhead caught are reported prior to the initiation temperature being reached (the red line). These early fish are almost exclusively caught between average daily stream temperatures of 34° F to 38° F.

Prior to the 12th of March, there was just too much ice in the tribs to get reliable data.The storm around the 15th dumped a bunch of cold water into the tribs causing stream temps to drop by about 2° F. Once stream temps hit 34 again on the 19th of March, we started seeing fish being caught in the streams. This trend has increased as average daily temps increased from 34° F to around 36° F. 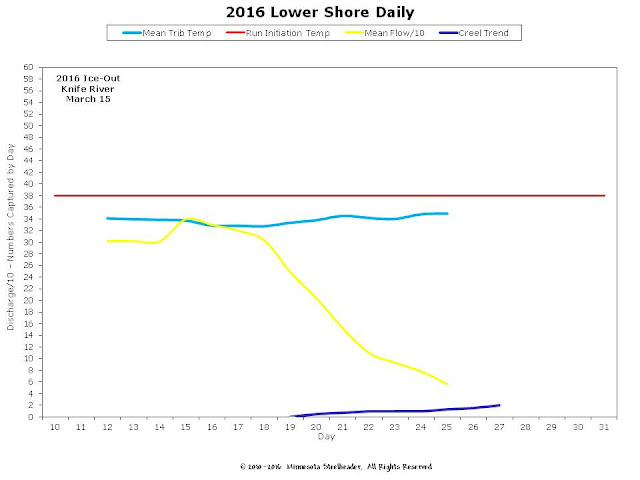 This trend will continue upwards as long as the streams continue to warm, culminating in a magical 7-21 day period of steelheading once the initiation thresholds are met. WHEN we hit that magic initiation threshold is the big question at this point. It all depends on snowpack, sun and mother nature at this point. This coming week is forecasted to be warm, but the brakes might just be stamped on if we get the predicted Polar Vortex next weekend.

The best part is we are just getting started... This process will be repeated on both the Mid and Upper Shore, and depending on the start dates for those two regions, you may just be steelheading into June.