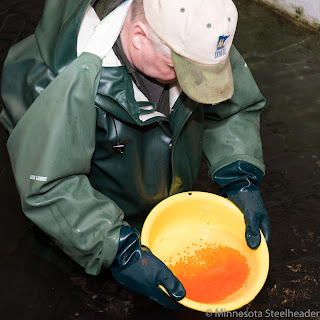 Many anglers have asked about steelhead and kamloops stocking along the north shore.  Here is some information from the MN DNR management plan outlining the 2015 stocking statistics.

Reminder, even though some steelhead you may catch are stocked, you still cannot harvest them. This will be apparent as the adipose fin is not clipped on stocked steelhead.  The adipose fin is only clipped on kamloops rainbow trout, and only clipped fin rainbow trout may be harvested in the Minnesota waters of Lake Superior.  This fin clipping is done when the fish are juveniles. The clipped fin area will be recognized by a healed over scar.

Steelhead Stocking:
A total of 356,390 steelhead fry were stocked in 2015 (Table 4). Stocked fish were offspring produced from Knife River captive broodstock and/or wild adult steelhead captured at the mouth of the French River. Steelhead fry continue to be reared for short lengths of time at the Spire Valley Hatchery (SVH) to prevent the potential introduction of VHS above the natural barriers. The fry are then transported in well water to North Shore tributaries and stocked upstream of natural barriers. Extended periods of very warm Lake Superior water in 2012 caused considerable mortality of steelhead broodstock in the FRCWH, which reduced fry availability in recent years. The steelhead stocking quota was modified with revisions to the 2016 Lake Superior Management Plan. The annual quota will be reduced or eliminated at some rivers in future years to more accurately reflect the annual fry availability over the past decade. Progress has been made to replace the losses of captive steelhead broodstock at the FRCWH, but it will take several more years before it is completely replenished.

Kamloops Stocking:
A total of 102,649 Kamloops yearlings were stocked in the French River (45,446), Lester River (19,730), and McQuade Harbor (37,473) in 2015, which exceeded the annual quota of 92,500. About 73% of the Kamloops quota is partially reared at SVH before being returned to the FRCWH each year. Spire Valley Kamloops are reared for approximately three months at FRCWH prior to being stocked into Lake Superior. The remaining Kamloops are reared entirely at the FRCWH prior to stocking in Lake Superior.