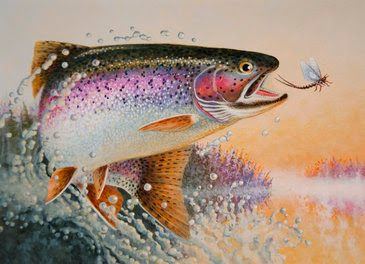 (Released August 12, 2013)
Cloquet artist Stuart Nelson’s painting of a rainbow trout leaping to consume a mayfly has been chosen for the Minnesota Department of Natural Resources (DNR) 2014 Trout Stamp.
The painting was selected from 13 submissions for the annual contest.

Nelson won the 1999 trout stamp contest with a painting of a brook trout but hadn’t submitted an entry since, instead choosing to paint other subjects. Asked why he chose to enter this year after the hiatus, Nelson said fans of his previous work wanted to see him paint another trout, and he decided to oblige.

Four entries advanced to the final stage of judging during the contest. Other finalists were Stephen Hamrik of Lakeville, second place; Nicholas Markell of Hugo, third place; and Timothy Turenne of Richfield, fourth place.

Trout stamp validations are printed on fishing licenses. This is the only verification needed to prove purchase of the trout stamp for angling purposes. Purchasers may request the actual pictorial stamp for an additional 75 cents.

The DNR offers no prizes for the stamp contest winner. The winning artist retains the right to reproduce the work.